St. John’s Church by-the-Sea dates its origin back to a meeting held on April 6, 1908 at the Pennsylvania Episcopalian Diocesan Church House which was located at the time at 12th and Walnut Streets in Philadelphia. Ten people met, consisting of nine lay and one clergy all considered the original founders of St. Johns. The Reverend Herbert J Cook opened the meeting with prayers. Together the group planned Sunday services for July and August of that summer. The Church was named and members selected a chairman, Mr. John M. Canfield.

Before building the chapel, services were conducted during the following summers at several locations including the Avalon Hotel located at 7th Street and First Avenue until it was demolished in 1987, the Well’s Memorial Presbyterian Chapel located at 9th Street and First Avenue which stills hold services today, and the Peirmont Methodist Church located on the southeastern side of the block between 32nd and 33rd Streets and Avalon Avenue, now a private residence.

It was over the next several years of continued gift and fund raising efforts by the trustees and members of the newly formed “Womens’ Guild of St. John’s Church” that monies were raised for the construction of a building on a section of lots donated by Mr. John M. Canfield.

It wasn’t until 1914 that the church was erected on southeastern corner of those lots by Avalon builder, Mr. Levi Wentzell. Work commenced around Easter of that year with a promise by Mr. Wentzell to build the church in 60 days which he did for a cost of approximately $5000. Finally on June 28th 1914 St. Johns Church-by-the-Sea was dedicated. 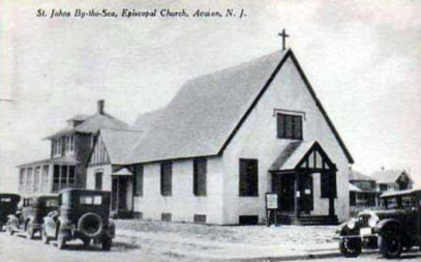 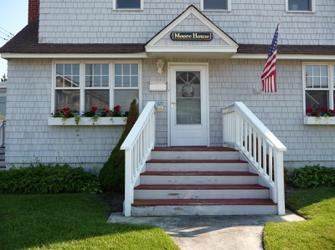 The following summer (1915) the first Episcopal visitation was made by the Right Reverend Paul Matthews Bishop of the Diocese of New Jersey who celebrated Holy Communion at 7:30 AM and preached at the 10:45 AM Morning Prayer Service.

It wasn't until the fall of 1957 that Trustees made the decision to build a rectory on church property next to the church.  The rectory was built and completed in the spring of the following year.

The Trustees of St. Johns Church-by-the-Sea continue to maintain the church, its property, and memorial gifts.  Their unyielding devotion to worshiping at, and caring for St. Johns, hopes to serve as a catalyst to those of future generations.